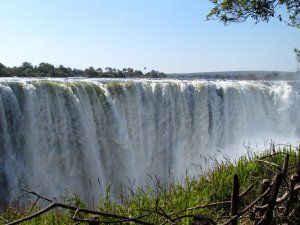 UNESCO Natural World Heritage Site
Victoria Falls and Zambezi National Parks are situated on the western tip of Zimbabwe. The Falls, known by the local Kololo tribe as Mosi oa Tunya- The Smoke that thunders, is one of the “Seven Wonders of the World” and one of the largest and most spectacular waterfalls on earth.

The falls are 1,7 kilometres wide and nearly 550 million litres of water cascade 70 to 108 metres into the chasm below -every minute- during the Zambezi River’s peak flow. Victoria Falls is made of five different “falls”. Four of these are in Zimbabwe: The Devil’s Cataract, Main Falls, Rainbow Falls and Horseshoe Falls -and one, The Eastern Cataract, is in the bordering country of Zambia.

The falls here are about 70 metres deep. They derive their name from an adjacent island in the Zambezi River where it is reported that locals used to conduct sacrificial ceremonies. With the advent of the missionaries, this practice was frowned upon and considered “devilish”, resulting in the name of the area.

The falls at this point are at their most majestic. With a wide curtain of water thundering down 93 metres into the gorge below and peak water flows of 700,000 cubic metres per minute, this section throws out a magnificent spray that continually nourishes the evergreen rainforest around the area.

This section is horseshoe shaped and is 95 metres deep. This section usually dries up at the height of the dry season between October and November.Rainbow FallsA beautiful rainbow can clearly be seen from this viewpoint. The falls are 108 metres deep at this point and are the deepest of the whole series.

These falls are situated completely on the Zambian side of Victoria Falls but have a stunning view from the Zimbabwean side. They are the second deepest falls of the series at 101 metres deep.

A unique view of the falls below can be found by descending 73 steps into the gorge.

The David Livingstone statue can be found at the left end of the Falls near the spectacular Devil’s Cataract viewpoint. On 16 November 1855, Livingstone (the first Western explorer to view the Falls) wrote in his journal: “…scenes so lovely must have been gazed on by angels in their flight.”

The rainforest area of Victoria Falls is filled with many unique species of flora and fauna. One can wander amongst the Fig, Mahogany and Date Palm groves while gazing at the falls from magnificent viewpoints. Many species of birds and small mammals may be spotted beneath the protective canopy of the forest.

This place is appropriately named to describe the turmoil where water from opposite sides of the falls collide in the Zambezi River as it turns in a southeasterly direction passing through several gorges.

This is a large baobab tree near the Falls. The tree which has withstood the test of time is 16 metres in diameter and 20 metres tall.

Having been designed in England, the bridge was transported from Europe in pieces and was assembled on site, bridging the Zambezi River and linking Zimbabwe and Zambia in 1906. The bridge is also renowned for its popular bungee jumping.

Zambezi National Park together with Victoria Falls National Park cover an area of 56,000 hectares. The northern border of the Park is formed by the great Zambezi River which also forms the border between Zimbabwe and Zambia for much of its length. A wide variety of larger mammals may be found within the Zambezi National Park including The Big Five: elephant, lion, buffalo, leopard and white rhinoceros. In addition, herds of sable antelope, eland, zebra, giraffe, kudu, waterbuck and impala as well as many of the smaller species of game can be viewed. The Zambezi River is home to a large variety of fish and is famous for its bream and fighting tiger fish.Zambezi National Park has two main game-viewing sections: the Zambezi River Game Drive, with an extensive network of roads along the river accessed through the main gate of the Park, and the 25 kilometre Chamabondo Game Drive in the southern part of the Park, which begins about 5 kilometres outside of Victoria Falls town – just off the main road to Bulawayo.

During the summer months (November to March) the weather is hot and humid, whilst during the winter it is pleasantly cool and dry – occasionally becoming cold at night.

The accommodation units at Zambezi Camp are self-contained lodges on the river bank, situated 6 kilometres upstream from Victoria Falls. The camp is served by a tar road and is open all year around. The lodges are all fully equipped and each has 2 bedrooms, a living room, bathroom and kitchen with stove and refrigerator.

Three exclusive fishing camps: Kandahar, Siansimba and Mpala Jena, are attractively situated on the banks of the Zambezi just off the Zambezi River Game Drive. Facilities consist of a flush toilet and cold shower; running water, a sleeping shelter (with low side walls at Kandahar), cement table with bench and braai unit. Fishing by boat is excellent in these areas.

For an unforgettable wilderness experience, there are 4 minimum development camping sites available in the Park. Situated on the banks of the Zambezi, these areas are unfenced and completely in the wild and are equipped with a braai stand and bush toilet only. Chundu 1 (25 kilometres upstream from the reception office) and Chundu 2 (26 kilometres) are situated in an acacia forest close to the river’s edge. Chomuzi (40 kilometres) is sited near some rapids and Siamunungu (47 kilometres) is located at the end of the Zambezi River Drive on a particularly lovely stretch of the river. Each camp can accommodate a maximum of 12 people.

Upstream along the Zambezi River Drive, there are 25 numbered sites where day visitors may picnic or fish. These sites are attractively situated on the banks of the river and sheltered beneath the beautiful shady riverine vegetation.

The town of Victoria Falls has most modern conveniences and there are several world-class hotels, lodges and restaurants. Supplies of fuel, food and provisions may be found here, as well as hospital facilities and many curio and craft shops.

Game viewing – visitors use their own vehicles for transport.

Fishing – visitors bring their own fishing gear and boats.
Walks – marveling at the splendour of the Falls is, of course, the prime activity of the area. Visitors should plan on viewing the Falls at several different times, as the ever-changing mist and light can afford spectacularly different views throughout the day.
Scenic views.
Boat cruises – daytime and sunset cruises on the Zambezi River.
Moonlight viewing – an unique opportunity to view the Falls and the Lunar Rainbow which takes place during periods of the full moon.
Other activities include: guided tours, bungee jumping, whitewater rafting, helicopter and micro-light flights over the Falls, tribal dancing, etc

This is one of the 7 Wonders of the World

Victoria Falls is one of the world’s most prolific and spectacular waterfalls.
Victoria Falls is a one stop destination affording the visitor several aspects of tourism ranging from prime game viewing, cultural tourism and the Falls themselves

How to get to Victoria Falls

Victoria Falls and Zambezi National Parks lie on the southern bank of the Zambezi River. Visitors can travel by car, driving 440 kilometres northwest from Bulawayo or through Kazungula Border Post with Botswana 90 kilometres to the west. The Victoria Falls Border Post is within metres of the Falls for access by road from Zambia. The road from Bulawayo to the Falls is completely tarred and the roads around thee Falls can easily be negotiated by all types of vehicles. Victoria Falls boasts an international airport with services from Harare and many regional and international destinations