From Espncricinfo.com
By ESPNcricinfo staff
July 2, 2011 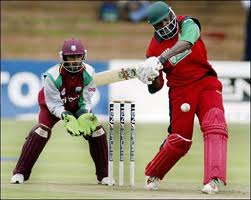 South Africa A beat Zimbabwe XI by one run in a nail-biting match in Harare, to score their first points in the tri-series. Chasing 239, Zimbabwe needed two off the last ball, but came off second as Rusty Theron held his nerve to bowl a wicket-taking dot.

Zimbabwe were steered through most of their innings by captain Brendan Taylor, who scored 98. While there were no other half-centuries from the line-up, the next six batsmen got into double figures, making sure Zimbabwe were on course in the chase. They took the third Powerplay in the 43rd over, needing 77 off 48 balls with seven wickets in hand. With a close finish looming, a five-ball 45th over did the hosts no favours. It came down to the last ball, off which Theron had Forster Mutizwa stumped.

Choosing to bat, South Africa’s innings was similar to that of Zimbabwe’s in that it was guided by a patient 98 by the captain-opener, Jacques Rudoplh. Three wickets went down in the first 15 overs at the other end, leaving South Africa in a spot of trouble at 52 for 3. But wicketkeeper Heino Kuhn complemented Rudolph well, scoring 61 off 70 balls as the pair added 116 runs. Cameos from the lower-middle order followed, pushing the score to a competitive 238. Prosper Utseya was the pick of the bowlers, picking up four middle order wickets.

Rudolph was named Man of the Match. Zimbabwe take on Australia A on Sunday, at the same venue, in the next game of the tournament.