The uncomplicated charms of Zimbabwe

As a crowd of American tourists arrive, an expat rediscovers her love for Zimbabwe.

New York-based author Douglas Rogers is bringing a party of readers to visit the haunts he describes in his first book, “The Last Resort,” an account of his parents’ brave bid to keep their backpackers’ lodge, Drifters, in eastern Zimbabwe, throughout the chaotic years of President Robert Mugabe’s land reforms.

Tourists are still a rare sight in any part of crisis-riddled Zimbabwe, aside from the resort town of Victoria Falls. There were only 2.2 million last year, most of them from neighboring South Africa.

My mother-in-law, who can remember the days when four-wheel-drive vehicles trundled regularly down Main Street and when Drifters pizza nights were a riot of lighthearted chatter, is eager to see these visitors from afar.

“Caterpillars,” I say to my husband wearily. “They’ll want to know if Zimbabweans eat caterpillars.”

(And yes, Zimbabweans do. My favorite fruit-and-vegetable store, next to Fajoo’s, the haberdasher, sells them. They look like large black nuts. I find them no more outlandish than the garlic-smothered snails offered in the restaurants along St. Michel in Paris, where I used to live.)

Still, we pile into our car this autumn afternoon in the Southern Hemisphere and drive out to Odzi, where Drifters still stands and where – so my mother-in-law has heard – “the Americans” will be relaxing.

I sit in silence as my husband hands over US$1 at the makeshift tollgate. This week, press reports said some traffic cops were raking in up to $300 each day from unofficial tollgates in a bid to supplement their meager $200 monthly salaries. Reports also claimed Mr. Mugabe was readying to push ahead with elections this year, defying regional negotiators and his coalition partners, who fear a rerun of the 2008 election violence that killed 200 people. Villagers loyal to the president are pushing for a clause in the Constitution that will make it a capital offense to criticize him.

The Cecil Kop mountain range towers to my left, flanks bleached to straw by the last of the summer sun. Sometimes I can’t help feeling marooned in the beautiful, but often-frustrating country I moved to 10 years ago when I got married.

We veer left up a dry track, past a cluster of salmon-pink rondavels (round, thatched shelters) and a long-empty swimming pool, its sides white as whalebones.

“The Americans” are on the veranda of Mr. Rogers’s parents’ home. My mother-in-law has already dived into the fray. My husband’s brother was Rogers’s friend and cricket partner at junior school.

I hesitate, and watch a dappled brown-and-white chicken scratch away at the red stone floor. Then slowly I begin to follow the conversation.

Lisa, an accountant from Kansas, has made the trip with her old school friend. It’s their first time in Zimbabwe. Val, who looks as if he’s in his 60s, can’t wait to bungee jump off the Victoria Falls Bridge.

Meta, who’s in the real estate business, tells me of her own daughter Kate, her love of restoring old houses, and the faraway days when she fled a staid and overpaid government job to spend a year in Samoa.

I think I recognize in this group of cultured visitors my own love of adventure and challenge.

When Meta mentions her Zimbabwean pen pal, John, whose letters she carries at the bottom of her suitcase (“He didn’t understand the word ‘boat.’ So I went into Barnes & Noble and bought him a reference book, and put bookmarks in the right pages before I mailed it.”) and whose home she will visit in the mountainous Chimanimani region during this trip, I want to share my stories, too.

So I talk about Mai D., who is crocheting me a bed jacket and who tut-tuts from my passenger seat whenever she sees a truck of riot police (“What do their mothers think?” she says). I talk about my 7-year-old’s friend Fadzai, who proudly told us that her family totem (symbol) was a porcupine. And yes, I talk about caterpillars and edible flying ants and the nutritional qualities of sadza, the local cornmeal staple, which – eaten with muriwo (green leafy vegetables like spinach) – is now my son’s favorite food.

On the edge of the garden, Rogers hovers near the blood-red pom poms of a double poinsettia bush trying to pick up a cellphone signal. I watch as he lifts his eyes to the hills and realize how much he must yearn for his childhood home from New York.

These are the things I relish about Zimbabwe and Zimbabweans: the uncomplicated friendships and the achingly bright colors and the doses of creative thought that expand my horizons daily.

It just took some rare American visitors to make me appreciate those qualities again. 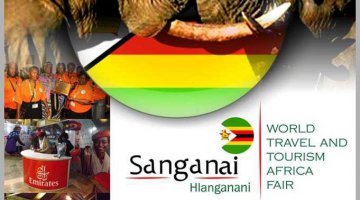