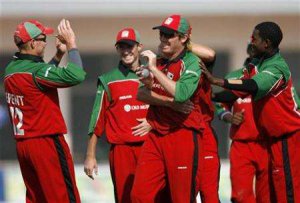 The Zimbabwe XI cricket team will bank on spin trickery once again as they seek international glory going into the first match of the triangular series, that also includes South Africa “A”, against a young Australian side at Harare Sports Club on Wednesday.

Having been well served by the tricks trio of Raymond Price, Prosper Utseya and Graeme Cremer in the last year, Zimbabwe’s bowling attack will be lynched on spin again as they seek a positive start to the high-profile series.

Cremer is, however, out injured and Malcolm Waller is likely to get the nod ahead of paceman Tendai Chatara in today’s match.

Coach Alan Butcher, speaking at a press conference yesterday, said they would stick to spin as they had done well in recent months.

“We are going with spin once again, the guys have done well for the team and faced with such strong opposition we will need to be at our best,” said Butcher.

“The guys have been working hard and they are looking forward to the challenge and hopefully we can get some good results.”

Zimbabwe face a young but talented Australian side with fringe players looking to break into the senior Australia national team.

Australia “A” team captain Tim Paine said his team was looking at performing well and they would have no excuses if they failed.

“We are a young side, but we still expect a lot from these guys, we just want to play as well as we can. We are playing against two strong teams, but we are up for the challenge,” said Paine.

Paine is one of the players in the touring Australian side that have been on the fringes and is looking to cement a place in the one-day-international squad.

Others that have played at the top stage include David Warner, Callum Ferguson and Mitchell Marsh.

While Zimbabwe will rely on spin, Chris Mpofu will provide some pace and former captain Elton Chigumbura may also get some overs.

Captain Taylor said Zimbabwe would continue being positive and aggressive to get some good results in this series.

“We have to stay positive and aggressive, our spinners will be looking at getting wickets all the way and we have some solid batters up front and everybody has to attack if we are to win matches,” said Taylor.

Zimbabwe are likely to field their usual suspects in the form of wicketkeeper/batsman Tatenda Taibu and Craig Ervine and will see the return to Hamilton Masakadza into the fray having been overlooked at the World Cup.

Previous post A thundering good time at the falls