A thundering good time at the falls 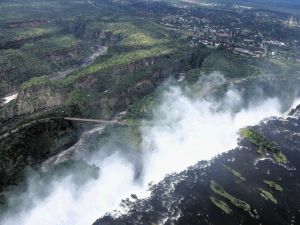 The performance of Artwell, the barman, was worthy of The Lion King, writes Tymon Smith

It’s a warm March night at The Boma, “Place of Eating”, and I’m surrounded by a group of mostly female travel agents who are all snapping their cameras eagerly at me. No, it’s not because of my good looks or the way I carry off wearing a chitenge.

It’s not because I’m the most exotic thing to be seen in the small Zimbabwean town of Victoria Falls in decades.

It’s not the way I bang the drums and eat warthog in the spirit of this northern version of Moyo. It’s because of the large black baboon with a red ass painted on my large forehead by a seemingly pleasant face-paint artist who’s been working the crowd all night, dabbing a giraffe here, a lion there and now a monkey beneath my receding hairline.

Having spent all my time since arrival at The Boma making comments about how it’s all straight out of The Lion King I suppose I have only myself to blame when one of the agents decides that I will now be known as Rafiki, the name of the baboon in Disney’s animated epic.

Rafiki has spent the day flying into Zambia, travelling across the border, lying about his profession for the benefit of the Zimbabwean immigration authorities, deciding that unlike several of the gung-ho agents he’d rather not chuck himself head first off the bungee jump at the Victoria Falls Bridge (the world’s second highest) and consuming several bottles of Zambezi Beer, complimented by the occasional G&T to stave off the possibility of malaria.

After eating succulent warthog, tough kudu and dry Mopani worms, Rafiki and the rest of the cast head back to the Victoria Falls Safari Lodge for a nightcap on the deck overlooking the floodlit watering hole on the plains below, while the falls thunder in the distance.

As this is a trip for travel agents, the morning’s activities include a sight inspection of not only our own hotel but also the one where the other group have spent their night – a miniature Sun City-style casino called The Kingdom, where warthogs mow the lawn and everything is even more Lion King than The Boma.

While the rest head off to check into the Rainbow Hotel, which like everything in Vic Falls, is a short distance away, Rafiki, the intrepid reporter, gets the chance to take a flip in a helicopter over the falls on a route called The Flight of Angels. When I arrive at the helipad, I’m accosted by a man holding a video camera who asks me how I feel about the prospect of flying in a chopper. Not wanting to be rude, I tell him I’m excited and then follow three French tourists into the machine as we set off on a spectacular 13-minute flight that affords amazing views of the falls and its surrounds.

I recognise the Frenchies as the parents of a very loud baby who flew with us from Johannesburg and screamed his way through afternoon drinks at the hotel the day before. We land, I amble off to have a cigarette and then am corralled into a small room where I quickly realise that the French tourist’s memento video is about to be spoilt by the sudden appearance of a strange man in a Boma cap talking about how excited he is to be flying in a helicopter. I disappear before having to witness my hijacking of this memorable moment and head back to the Rainbow.

It is a strange, ’70s style concrete block with Moorish influences and a pool that lets you swim up to the bar and order a cold one from the super-friendly world-class barman, Artwell. All of us instantly take a shine to him and start handing over our dirty Zimbabwean-issue US dollars to as fast as he can take them.

Artwell and a marimba band that management sends over to entertain us during lunch make dealing with a young, brash, crotch flashing, BMW driving yob from Harare a little easier.

Finally it’s time to go look at the falls themselves – Mosi-o-Tunya, the smoke that thunders. Not the highest or the widest in the world but claimed to be the largest based on the size of the sheet of water they emit, there’s no denying the awesome power of the sight of this natural wonder.

While we’ve covered ourselves in blue Thompson Tours-issued ponchos, making us look like a coven of schoolgirl witches and have been told to be prepared to get wet, there’s no preparation for just how wet you get as you make the journey from the statue of David Livingstone to the bridge, each viewing spot leading to more drenching until at the end we’re “walking, walking, in the rain”.

While team B is off jumping off the bridge again and getting a fun-filled edutainment tour of the structure, we’re off to try dry our clothes before the evening’s dinner cruise on the Zambezi. Here, we slowly float within Zimbabwean waters while sipping on G&T’s, chewing a three-course meal and blushingly attempting to get to grips with the on-board toilet’s flushing mechanism, pausing occasionally to take in some hippos before a plague of midges descend on the food and beverages and drive everyone nuts.

Back at the bar, after convincing team B that their Vic Falls experience is incomplete without meeting Artwell, I learn that travel agents can drink journalists under the table and try and have a sneaky political conversation with the owner of the hotel, which leads me to decide that politics and Mugabe generally leave Vic Falls alone. Harare needs the tourist dollars and poachers and predatory animals pose more immediate threats to locals than do war vets or Zanu-PF supporters. In the morning all that’s left of our late-night shenanigans are many green Zambezi bottles piled up at the bar.

For the final day it’s lunch at the very colonial Stanley and Victoria Falls Hotel a little outside of town. We marvel at the stupidly expensive bottles of wine and Cognac kept in the cellar before Rafiki and team A make their way to the Victoria Falls Game Park where we’re scheduled to do some rhino tracking and take a ride on an elephant. Unlike team B, who had no luck the previous day on their rhino spotting, we’re in luck as a large brown rock moves and turns into a rhino and her cub. The elephants provide a moderate, gently strolling view of the bush once you forget about their tendency to stop and let forth gushes of urine and grab chunks of bush on the fly.

After hours of bushwhacking it’s off to the last hotel, the super-luxurious, uber-colonial, 107 year-old Victoria Falls Hotel where, while drinking a cocktail on the patio overlooking the panoramic vista of the gorge, the bride and the falls behind – you could be forgiven for feeling like Cecil John Rhodes making empire building plans and dreaming of your legacy.

Mugabe, on the other hand, likes to stay at the horribly 80s Southern Sun-style Elephant Hills golf resort up the road, which leaves me cold and feeling like I’m stuck in a bad television advertisement involving traditional dancers, drums and the opening song from The Lion King.

As I opt for an early-ish night and a return to my colonial cocoon, I weigh up my whirlwind three days in Zimbabwe’s tourist paradise and have to conclude that it’s been pretty good fun. The water was too high for rafting, the helicopters no longer fly into the gorge and I didn’t get to ride with an anti-poaching unit but then again I’m not known for being overly adventurous.

It’s only when I try and spend my last two motley dollar notes at the airport café in Livingstone that I’m reminded of the real word when the cashier tells me, “We don’t accept these dirty Zimbabwean notes here in Zambia.”

They are on my pin-board at home, next to a ten trillion Zimbabwean dollar note a man on the street tried to sell me for US$10, and a certificate which says that I saw one of the Seven Natural Wonders of the World.

Previous post Baboon Causes Man to Fall to His Death