The country is divided into 18 provinces, being Luanda the capital. With a total of 4,837 Km long borderline, Angola is bordered with Congo-Brazzaville at the Northern province of Cabinda, the Democratic Republic of Congo (former Zaïre) to the North and East, Zambia to the East, and Namibia to the South.

With an area of approximately 7,283 square kilometres (2,812 sq mi), the Northern Angolan province of Cabinda is unique in being separated from the rest of the country by a strip, some 60 kilometres (37 mi) wide, of the Democratic Republic of Congo (DRC) along the lower Congo river. Cabinda borders the Congo Republic to the north and north-northeast and the DRC to the east and south. The town of Cabinda is the chief population center.

Consisting largely of tropical forest, Cabinda produces hardwoods, coffee, cocoa, crude rubber and palm oil. The product for which it is best known, however, is its oil, which has given it the nickname, “the Kuwait of Africa”. Cabinda’s petroleum production from its considerable offshore reserves now accounts for more than half of Angola’s output. Most of the oil along its coast was discovered under Portuguese rule by the Cabinda Gulf Oil Company (CABGOC) from 1968 onwards. 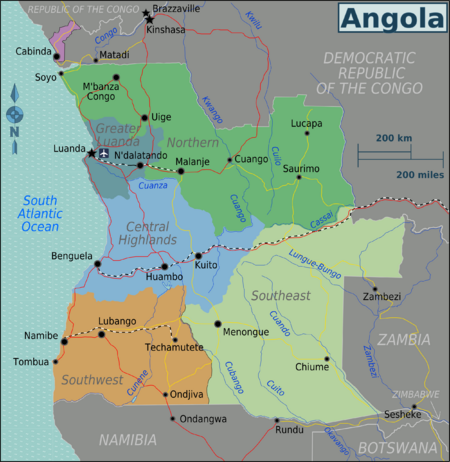 Limited to no information available on other border post opening and closing hours.  Caution should be exercised in travel arrangements accordingly.